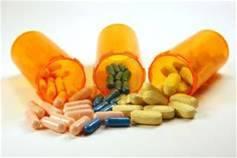 Untreated water can interfere with pharmaceuticals.

This is the second of four articles originally published in American Chiropractor Magazine, Water Conditioning & Purification Magazine and Water Technology Magazine. Updated and Edited for this page.

Any water treatment professional is familiar with the many health risks related to consuming unpurified water. What many people, even in the water industry, do not yet know is that tap water can interfere with the medications doctors prescribe.

Many prescription vials carry small brightly colored stickers that say Take on an empty stomach or Do not take with dairy products or antacids. The pharmacist places these stickers on the vial because the components of food, milk or antacids will inhibit the absorption of the medicine and render it partially or totally inactive. These same components are found in tap water and can render some medication inactive. Antibiotics, specifically tetracycline, norflaxin and ciprofloxacin can be affected in this way.

Fluoride Considerations: Another pharmacological reason not to use untreated tap water to swallow medications is related to the fluoride content of the water. Many post-menopausal women suffer from osteoporosis, which is a breakdown or thinning of the bones. The treatment for this condition is hormonal and calcium supplements. However, if calcium is consumed with tap water, the fluoride in the water will render the calcium insoluble. Therefore, the calcium might not be absorbed, and it will have no effect on bone formation.

If tap water contains an excessive amount of fluorides, it may cause a condition known as endemic dental fluorosis, which appears as a dark brown spotting of the teeth. In certain cases, the teeth become chalky in appearance.

American Medical Association (AMA) has issued several printed statements about drinking water and human health. AMA states, Since drinking water frequently contributes significantly to the human intake of a number of chemicals, the physician should be aware of the consumption of water in relation to the patients condition. For example, the sodium content of drinking water in public systems is reported to health authorities so that physicians can prescribe alternative water sources for hypertensives and others who must restrict sodium intake. All patients with any type of cardiovascular disease should benefit from sodium-free water.

Another pharmacological interaction occurs between sodium and medication lithium. Consuming excessive amounts of sodium will increase the excretion of lithium resulting in a decrease in the activity of lithium and increase the symptoms of bipolar affective disorders, or manic-depressive illnesses.

As people get older, their renal (kidney) function decreases. Drinking chemical-laden water puts an additional stress on an already stressed renal system. Evidence of this is seen in people who are maintained on hemo-dialysis because of kidney failure. They are advised not to consume tap water with excessive ammonia levels, since ammonia causes toxic uremic effects in this patient population.

AMA also attributes outbreaks of disease to the quality of water. Microorganisms such as protozoa, fungi and coliform bacteria have been found in tap water, usually resulting in an advisory to boil the water. These microorganisms are potentially dangerous to anyone who consumes them, and they pose a particular danger to people with weakened immune systems, as in cases of chemotherapy, radiation and AIDS.

These are just some of the pharmacological reasons not to drink unpurified tap water, including the possible inactivation of medications, aggravation of existing health problems or even the creation of new ones. Mounting evidence of serious health risks such as these provide ample motivation for increasing numbers of people to investigate the water treatment option.

If you would like to know more, consult your local Authorized Aquathin Dealer or direct your questions to: Alfred J. Lipshultz, President, Aquathin Corp.

FOR THE BEST TASTE IN LIFE & 35 YEARS PURE EXCELLENCE