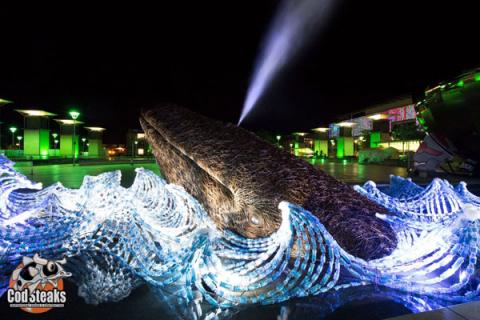 "IN THE UK, BRISTOL'S GIANT WHALE LIGHTS UP GREEN CAPITAL"

The Bristol Whales aim to highlight the levels of waste from single use plastic bottles.

A spectacular LED-lit monument made of recycled plastic bottles has been unveiled in Bristol to commemorate the city's year as European Green Capital.

The Bristol Whales sculpture shows two wicker whales - a 15-metre long tail section and a nine-metre long head section - breaching from an ocean of 70,000 plastic bottles. (Scroll down for video).

The recovered plastic bottles were up-cycled from the Bath Half Marathon and the Bristol 10K run. The whales will be exhibited in the city centres Millennium Square until 1 September.

The plastic bottles around the sculpture are illuminated with LEDs, provided by lighting specialists Stage Electrics, which add to the green credentials of the piece by creating energy efficient lighting.

The project was designed and built by artists from Cod Steaks and initiated by Artists Project Earth. Cod Steaks lead artist Sue Lipscombe said: Our sea of recycled plastic bottles represents the detrimental effect of plastic pollution on the ocean which is something that all of us can act on today by reducing our consumption of single use plastics.

As part of the developments for Bristols year as European Green Capital, the city also saw the development of its first community-owned solar farm in May. The 1.8MW Moorhouse Solar Farm will deliver 1,780MWh of renewable electricity to the grid each year, enough to power more than 400 homes.

They wrote: Our aim is to engage with over local 1,000 businesses during the European Green Capital Year and we see a real opportunity for this model to be adopted by other cities in the UK and further afield.