Lead pipes lurk in older neighborhoods across the nation 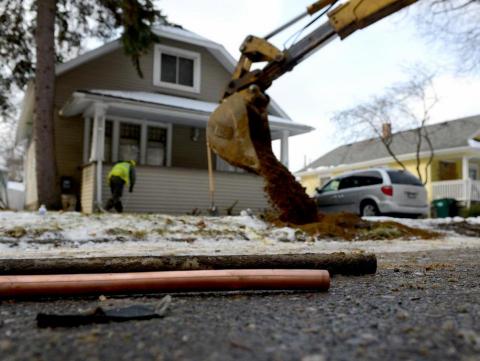 TOLEDO, Ohio (AP) Lead pipes like the ones that led to contamination of the tap water in Flint, Michigan, carry water into millions of older homes across the U.S. every day, a legacy of an era before scientists realized the severe long-term health consequences of exposure to the heavy metal.

Replacing these buried pipes would be costly in many cases, so chemicals often are added to prevent the plumbing from corroding and leaching lead and other dangerous metals into the drinking water. That's a step authorities in Flint failed to take, for reasons that are being investigated.

Some researchers question whether chemical treatment and routine testing for lead in the water are enough, arguing that the only way to remove the threat is to replace the pipes.

Utility operators say what happened in Flint a largely poor and predominantly black city of about 100,000 people that was once an automobile manufacturing powerhouse is unlikely to be repeated, pointing to a series of mistakes at every level of government.

The city began drawing drinking water from the Flint River, and state environmental regulators failed to make sure the corrosive water was treated to prevent leaching from old pipes. The result: Flint children have been found with high blood levels of lead that could cause lifelong health problems, and parents and others are furious at public officials.

Lead pipes are predominantly found in older neighborhoods, especially in the East and Midwest, because most cities stopped installing them in the 1930s. The pipes carry water from main lines under the streets and into homes.

Estimates vary on how many of these pipes are still in use. A survey just completed by the American Water Works Association puts the number at 6.5 million. Inside homes, lead can also be found in faucets and in the solder that is used to join water pipes, but that is considered a less serious concern.

To stop lead from seeping into tap water, chemicals to protect the pipes are commonly added to the water during the treatment process. Some utilities also adjust the composition of their water to limit its corrosiveness.

In Toledo, which like Flint is an older, Rust Belt city, officials have long treated the water with phosphates to prevent leaching. Phosphates are generally considered safe for humans but can lead to runaway algae growth when the water works its way back into lakes and rivers.

Trouble can start when a utility makes a change in its treatment process or taps into a new water source without accounting for how that will affect its lead pipes, said Daniel Giammar, a lead and water researcher at Washington University in St. Louis.

"In general, as long as the water chemistry isn't changing, you won't have a problem," he said.

The U.S. Environmental Protection Agency requires all drinking water utilities to test for lead. The frequency of the testing can range from six months to every three years, depending on past lead levels.

The reliability of such testing is a matter of debate. Often, a small number of homeowners are given instructions and asked to provide samples of their water, which is then analyzed by regulators. That, of course, does not guarantee all homes are lead-free.

"Each individual really is given a large responsibility, and I think most people would be surprised to learn that they can't trust what's flowing from their tap in many cities," said Marc Edwards, an environmental engineering professor at Virginia Tech University who investigated high lead levels in Flint.

Determining the scope of the problem is complicated by the lack of accurate records on which homes have lead pipes, Edwards said.

The EPA says cities need to take steps to reduce lead levels if they exceed 15 parts per billion. But many health experts say no amount is safe. They say that is especially true for children, who are susceptible to learning disabilities and behavior problems from exposure to lead.

David Cornwell, who is president of an environmental engineering company and has written some of the corrosion control methods used in the industry, said there is only one way to make certain that tap water is lead-free: "Ultimately, we have to get rid of those lead lines. No question about it."

Similarly, an EPA advisory committee of water plant managers, water quality experts and health professionals recommended to the agency in December that such pipes be replaced.

Only a few cities have attempted such an undertaking.


Utility operators in Washington started a $400 million pipe replacement program after lead levels spiked above federal standards. But they halted the work in 2008, saying other measures had brought lead down to acceptable levels.

In Michigan, Lansing has eliminated about 13,500 lead lines and hopes to have all of them replaced within the next two years. The city is spending about $42 million over 10 years to do the work.

One big obstacle is that the lead pipes under the streets are owned by the utilities, while the sections leading into houses are usually the responsibility of the homeowners.

Also, researchers have found that removing just part of the lines isn't enough to solve the problem and can actually make it worse by loosening lead particles in the plumbing that remains. That's why the water utility in Madison, Wisconsin, decided to replace its lead pipes and cover half the cost for homeowners.

City water quality manager Joe Grande said only a few lead pipes remain since the completion of the $15 million project three years ago.

"We look back and know we made the right decision," he said. "We're not in a situation like Flint today because we made those decisions years ago."