Drugs flooding into Puget Sound — and its salmon 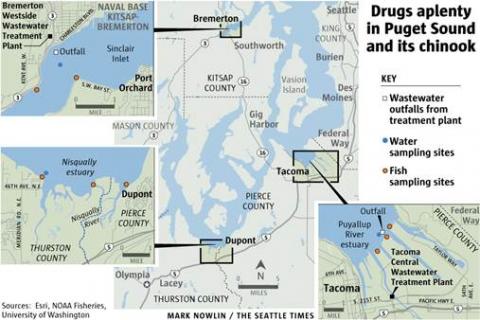 EVERYONE LIVES DOWNSTREAM FROM EVERYONE ELSE !!!

Every emerging contaminate you will read in the following article is removed by your Aquathin MultiBarrier Reverse Osmosis Deionization Process.

Note:  last line of the article offers a false sense of security.  How do you feel about that ???

From Prozac to caffeine to cholesterol medicine, from ibuprofen to bug spray, researchers found an alphabet soup of drugs and other personal-care products in sewage-treatment wastewater and in the tissue of juvenile chinook in Puget Sound.

Those drugs and dozens of others are showing up in the tissues of juvenile chinook, researchers have found, thanks to tainted wastewater discharge.

The estuary waters near the outfalls of sewage-treatment plants, and effluent sampled at the plants, were cocktails of 81 drugs and personal-care products, with levels detected among the highest in the nation.

Why are the levels so high? It could be because people here use more of the drugs detected, or it could be related to wastewater-treatment plants processes, said Jim Meador, an environmental toxicologist at NOAAs Northwest Fisheries Science Center in Seattle and lead author on a paper published this week in the journal Environmental Pollution.

The concentrations in effluent were higher than we expected, Meador said. We analyzed samples for 150 compounds and we had 61 percent of them detected in effluent. So we know these are going into the estuaries.

The samples were gathered over two days in September 2014 from Sinclair Inlet off Bremerton and near the mouth of Blair Waterway in Tacomas Commencement Bay.

The chemicals turned up in both the water and the tissues of migratory juvenile chinook salmon and resident staghorn sculpin. If anything, the study probably underreports the amount of drugs in the water closer to outfall pipes, or in deeper water, researchers found.

Even fish tested in the intended control waters in the Nisqually estuary, which receives no direct municipal treatment-plant discharge, tested positive for an alphabet soup of chemicals in supposedly pristine waters.

That was supposed to be our clean reference area, Meador said. He also was surprised that levels in many cases were higher than in many of the 50 largest wastewater-treatment plants around the nation. Those plants were sampled in another study by the EPA.

The findings are of concern because most of the chemicals detected are not monitored or regulated in wastewater, and there is little or no established science on the environmental toxicity for the vast majority of the compounds detected.

Meador said he doubted there would be effects from the chemicals on human health, because people dont eat sculpin or juvenile chinook, and levels are probably too low in the water to be active in humans. But one of the reasons the wastewater pollutants studied as a class are called chemicals of emerging concern is because so little is known about them.

However, You have to wonder what it is doing to the fish, Meador said. His other recent work has shown that juvenile chinook salmon migrating through contaminated estuaries in Puget Sound die at twice the rate of fish elsewhere.

The drugs detected in the study could be part of the reason, as they have the potential to affect fish growth, behavior, reproduction, immune function and antibiotic resistance.

The drugs selected for testing were chosen on the basis of their widespread use by people, the likelihood of their continued use and the potential for higher levels of contamination in the future as the human population in the Puget Sound region continues to grow.

The results represent only a snapshot, and levels could be higher or lower, seasonally, depending on peoples use of drugs and volumes of treatment-plant discharge. For instance, levels of DEET (an insect repellent) and antihistamines are probably even higher in summer.

Some regional differences were detected.

Substantially higher concentrations of DEET, caffeine, ibuprofen and female reproductive hormone were found in Bremerton effluent, compared with the Tacoma site, which researchers concluded could be due to differences in usage.

The amount of drugs and chemicals from all plants into Puget Sound could be as much as 97,000 pounds every year, the study found.

Unexplored were the presence and effect of drugs in predators that eat the fish, and in other contaminated organisms that the fish eat, such as algae or invertebrates.

Treatment plants in King County are effective in removingsome drugs in wastewater, but many drugs are recalcitrant and remain. Seizure drugs, for instance, are very hard to remove, and ibuprofen levels are knocked down but not out during treatment, said Betsy Cooper, permit administrator for the countys Wastewater Treatment Division.

You have treatment doing its best to remove these, chemically and biologically, but its not just the treatment quality, its also the amount that we use day to day and our assumption that it just goes away, Cooper said. But not everything goes away.

Jessica Payne, spokeswoman for the state Department of Ecology, said the agency needs more research funding to monitor the presence and examine the impact of chemicals such as those identified in the study.

Ongoing research is really our best tool to understand these chemicals, Payne said.

The study was not concerned with drinking water. Seattle Public Utilities customers receive first-use water from the high Cascades, above any wastewater discharge and remote from human populations and septic tanks.