Dangerous 'forever chemicals' have been found in US drinking water at alarmingly high rates ... 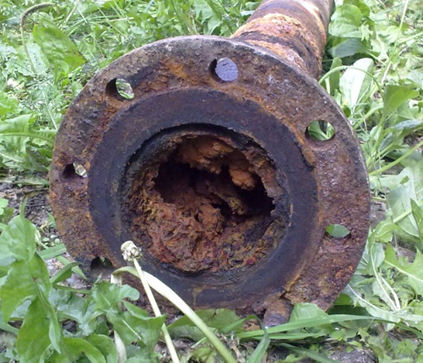 Dangerous 'forever chemicals' have been found in US drinking water at alarmingly high rates ...

Researchers from Harvard estimated in 2016 that at least 6 million Americans nearly 2% of the population were drinking water with PFAS levels ...

Dangerous 'forever chemicals' have been found in US drinking water at alarmingly high rates. Here's what to know about PFAS.

This class of artificial lab-grown chemicals doesn't break down in the environment, and instead remains intact in water, air, and bodies for thousands of years, according to the Associated Press. For that reason, they've become known as "forever chemicals."

We stopped watering immediately, we usually water twice a day. ... just not possible to water a garden this size with bottled water, said Adams-Falls.

Fish tested from these water bodies were found to have high level of PFOS resulting ... Touching the fish or water and swimming in these water bodies is not ... relating to PFAS contamination in fish, visit Michigan.gov/pfasresponse.

COMMENTARY  -- PFAS WERE KNOWN IN 2000.  FOR 18 YEARS, THERE HAS BEEN NO REMEDIATION.  THE COMMENT BELOW CITES "FEW MORE YEARS TO DETERMINE"

The military departments will prioritize sites for further action using a risk-based approach. The departments fundamental premise in site prioritization is worse first, meaning the DoD components will address sites that pose a greater potential risk to human health and the environment first. These known or suspected PFOS and/or PFOA release areas are in various stages of assessment, investigation, and cleanupNow that we have an initial inventory, it may take a few years to determine the potential cleanup costs as we collect information on the nature and extent of the releases. Lucian Niemeyer, assistant secretary of defense, testifying about perfluorinated chemicals at a House Armed Services Committee hearing on the Defense Departments 2019 budget request. Niemeyer said that as of August 2017 the department had identified 401 active and closed bases with a known or suspected release of PFOA or PFOS that may affect drinking water off the base.

I recently enrolled in courses taught by Calgon Corp. to learn more (to date) and re-edify Aquathin's Position for treating PFAS for both POU and POE (see attached).

For residential POE with 1/2" to 1" water pipe, Aquathin is adding media to the SYNBFF-1 and 2 with two full cubic feet of GAC, followed by the AquaShield ASTF4003 (SED / BLOCK / ASTF).  Larger pipe sizes, water volumes, PFAS concentrations will be individually reviewed for recommended treatment at that time.

Please review the PFAS info below and at bottom.

Two decades after pollution from highly toxic fluorinated chemicals was first reported in American communities and drinking water, the number of known contamination sites is growing rapidly, with no end in sight. The latest update of an interactive map by Environmental Working Group (EWG) and the ...

According to a new mapping effort by the Environmental Working Group, known drinking water contamination sites have grown from just a handful a decade ago to more than 94 locations. That includes dozens of military bases where the chemicals were used in firefighting foams, as well as near ...

The most-studied chemicals in the class are linked to kidney and testicular cancer, thyroid disease, decreased sperm quality, high cholesterol, ...

The miracle compounds of 20th-century chemistry are causing an ecological, legal, and regulatory mess today. (2017)

P.S. "Splash NewsBulletins", "Forum Q & A" , Biz Bank, Tech Bank and Quote Bank... ARE  ALL FREE services to all Authorized Aquathin Dealers and their clients to keep you abreast of technology updates and industry news.  Like us on

From: Tech Support Sent: Monday, August 28, 2017 10:30 AM To: Aquathin Corporation (info@aquathin.com) Subject: FORUM Q&A: HOW TO REMOVE PFOA AND PFOS

How To Remove PFOA And PFOS

Last month the U.S. EPA updated its drinking water guidelines for PFOA and PFOS (also known as perfluorooctanoic acid and perfluorooctanesulfonic acid, respectively) apparently in response to rising attention paid to the dangers of these chemicals in drinking water.

Small communities in New York, Pennsylvania, Alabama, and West Virginia have all recently become concerned with their exposure to PFOA and PFOS, which found their way into drinking water supplies through nearby industrial plants and military bases. The health risks of exposure to the chemicals include developmental effects to fetuses during pregnancy or to breastfed infants, cancer, liver effects, immune effects, thyroid effects, and more. Citizens are rightly concerned over the years theyve spent drinking contaminated water and the new EPA guidelines were designed to set stricter limits on the chemicals.

The agencys assessment is that drinking water with concentrations of PFOA and PFOS below 70 parts per trillion will not result in adverse health effects over a lifetime of exposure.

If these chemicals are found in drinking water systems above these levels, system operators should quickly conduct additional sampling to assess the level, scope, and source of contamination, Joel Beauvais, the EPAs deputy assistant administrator for the office of water, wrote on an agency blog. They should also promptly notify consumers and consult with their state drinking water agency to discuss appropriate next steps.

However, Beauvais blog post was notably devoid of any precise steps for treatment strategies for removing PFOA and PFOS. When the EPA placed the chemicals on its Contaminant Candidate List 3 and Third Unregulated Contaminant Monitoring Rule years ago, the Water Research Foundation (WRF) was prompted to conduct a study into Treatment Mitigation Strategies for Poly- and Perfluoroalkyl Substances which has now been released.

To test for PFOA, PFOS, and other poly- and perfluoroalkyl substances (PFASs), principal investigators Eric R.V. Dickenson and Christopher Higgins evaluated 15 full-scale water treatment systems throughout the country to see how they were dealing with the contamination.

We thought the information would be most credible if it were obtained by sampling actual water treatment facilities before and after treatment, as opposed to investigating removal in laboratory and research facilities, the WRF said. This approach required involving utilities in areas known or suspected to have PFOS and PFOA in their water supplies. We also wanted to involve utilities with a variety of water treatment technologies and processes.

The WRF found that aeration, chlorine dioxide, dissolved air flotation, coagulation, flocculation, sedimentation, granular filtration, and microfiltration were all ineffective for removing PFASs including PFOA and PFOS. Anion exchange was moderately effective in treating PFOA, highly effective for PFOS, and failed to remove several other PFASs. Nanofiltration and reverse osmosis proved to be the most effective methods of removing even the smallest PFASs. Granular activated carbon (GAC) was shown to be adept at removing most PFASs and it may be the average utilitys best bet for PFOA and PFOS contamination.

In many cases, the most cost-effective treatment for removing PFOA and PFOS will be GAC, though water utilities will need to test GAC to determine site-specific performance, the WRF said.

According to the WRF, PFOA and/or PFOS occurrence has been discovered in 30 states. The WRF advised that any water treatment plant thats near a chemical manufacturing operation or military base should be on alert for PFASs contamination. While the EPAs recent guidelines are a non-enforceable suggestion, municipalities should still take heed.

Some states may choose to regulate PFOA and PFOS based on these guidelines or, in the case of states that already have regulations for PFOA and PFOS set higher than the health advisory levels, lower the maximum amount allowed in water, the WRF said.

At this stage, its difficult to determine whether PFOA and PFOS will continue to be a pressing issue around the country or if requirements to stop using the chemicals and the new EPA guidelines will be enough to curb the threat. Either way, if these contaminants are a problem we now have the information necessary to fight back.